It’s one of the most exhilarating times to ride a bike: the deep, dark night. And, if you work 9am-5pm, night riding might well be the only spin you get when the winter sun sets well before your security pass beeps your exit at the office.

It’s not just commuting, or doing your favourite local loop in the dark: night riders are out dazzling the possums down single track on their mountain bikes, too.

Take a look at the following three tips, and discover how to get the best out of bike riding at night. While most road bike riders ignore the latter (when was the last time you saw reflectors on a road bike?), the red rear reflector is a great idea, and amber pedal reflectors (compulsory in the UK) are a good way for car drivers to distinguish cyclists at night (the up down movement is eye-catching), but they’re missing from most cleat-compatible pedals.

Lighting up is not just about obeying the rules: a strong white light focussed on the road in front of you shines a light on what’s coming up (pot holes, animals etc.) before it’s too late.

Cyclists riding towards you on bike paths can get a bit agro (and vocal) if your front light is shining up their face, so keep it angled down at the road ahead, and avoid using helmet-mounted lights unless you need one to look around corners while careering down a single track on a mountain bike (if this is you, you’ve probably got one on your handlebars, too). You can make yourself really noticeable when bike riding at night. You can wear entirely reflective jackets, gilets, and even shoes, which, in addition to flashing lights, can brighten you up like a Christmas tree. No matter: you want to be seen.

Night bunch or group rides mean there’s a group of you with flashing lights and reflective clothing, however it takes a different skill set to a) ride in a group and b) ride in a group in the dark.

Even if you’re used to bunch rides, riding in the dark with others means you’re relying far more on the riders in front of you to spot hazards ahead, keep to the same speed, and so on. If you’re mid-bunch you can lose the ability to look ahead. Ride right at the back of the bunch, and keep a bit of distance, if you’re new to it.

3. See your usual roads in a different light.

The best thing about night riding is seeing your usual landscape with a different eye. It’s zooming past a stadium after everyone has gone home. It’s breaking Strava records along usually- crowded strips while they’re mercifully deserted.

Public transport has wound down; cars are few and far between (though taxi drivers can be in their own world), as are pedestrians. It’s just you and your senses. Turn the tunes down, or off. Sing your own song, while there’s no one around. Keep alert. Concentrate harder. You’re not blindly following the trail of cycling commuters, or weekend warriors, you’re really taking your own path. Make the most of it. 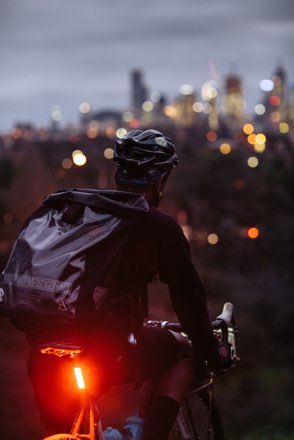